You are here: Home

Well, a lot has happened since Friday. You'llbeinmyheart continues to train well and things are on schedule but with an asterisk or two. The first asterisk is we have always favored the Edgewood Stakes on Friday as our goal for Derby week but plan "B" has been the La Troienne Stakes on Thursday, May 2. This race is 7/8ths of a mile on the main track for a purse of $100,000, just like the Edgewood. One big difference is it's a Grade III race, which makes it a much bigger step. Graded races are the best run in North America. The attraction is if a horse runs in the top three of one of these races their family tree becomes enhanced in a major way. You'llbeinmyheart, all of her siblings (two little sisters for now) and her dam (her mom) would all increase in prestige and value. We still favor the Edgewood at 1 mile on the turf (grass track) but the La Troienne is not turning out to be as tough as we thought according to the those horses indicating they are interested in running. This information comes from the racing office and conversation on the backstretch. 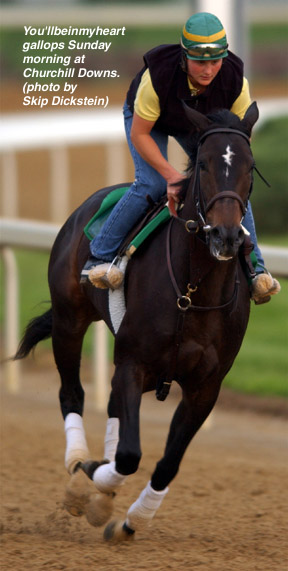 So here's the plan ... we will enter in both races and see who goes in. Entry day for the La Troienne is today (Monday, April 29) for the race to be run on Thursday. We enter for the Edgewood on Wednesday to be run Friday. Wednesday morning we will get to assess both races and make a decision. This presents quite a dilemma for travel plans and a little uncertainty but it's a "win/win" situation for the horse and she comes first.

Now about the second asterisk. After talking to Gary yesterday morning (Sunday) You'llbeinmyheart has two minor issues she is dealing with. The first is a minor cough for the last two days. He had the vet treat her with antibiotics and she seems to be better. The vet indicated with the weather changes in Louisville coming so often from cold to warm and back he has been treating a large number of horses with the same problem. The good news is it seems very minor and is getting better. The second issue is a bit more problematic. The track at Churchill Downs has been fairly dry and cuppy (a bit like running on the beach) for the time we have had to train over it. This is brought on by lack of moisture in the cushion of the track. Since racing surfaces are made up of the earth's elements they are affected by weather and natural events. The bad news here is horses tend to strain their joints in their ankles when they exercise on these types of tracks. Gary has noticed a minor swelling in You'llbeinmyheart's right hind ankle. Again this is a minor problem but it will alter her training and if it gets worse could force us to scratch (not run). It has rained over the weekend and the track should be better.

As it is now, she galloped this morning and will continue to train. Her last serious work before the race was scheduled for this morning (Monday). This will be delayed until Tuesday (if the swelling improves) and we will switch from a work on the main track to a work on the turf (grass track). Tomorrow's update should begin to answer some of the questions in the balance. Horses may not be able to verbalize but a good horse trainer learns to understand what a horse tells him. Gary P. listens pretty well.